So, what happened on the second day of the Kenney Jam 2019.

After going to bed quite late ~5AM, I took a good 6h sleep and continued the work on the game at around 11:30. First thing I did was writing the devlog for day 1. And now here we are, devlog day 2.

The first changes in the game were the improved spawn sequence for the enemies where I can now control the spawn time between each enemy, making for more interesting wave patterns.

After that I tried out something new, shaders. To be precise creating shaders with the Shader Graph tool of Unity. I watched some tutorials and over 2h of work I was able to throw out the following water shader.

I'm very happy with the result, especially because I was not really sure what I was exactly doing in the Shader Graph tool.

Next was finishing the layout of the first level and adding some assets to make it more interesting. Here is the result.

Because the player should not directly start with level 1 when opening the game, it was time to add a main menu scene which shows the title and prepares the player for what he is going to see. I basically just used the assets I created for the first level, throw in some moving ships and we have an interesting main menu scene. I added some nice extra effect which is a buoyancy effect for the UI elements to make them look like they are floating in the water. First I planed to make it via animations, but I decided to make it with a small script so that I can randomize it and make it more interesting. It may be a little harder to hit the buttons, but it looks awesome. :D

This was also the time where I gave the game it's current name "Ship Defense". Not very created. Maybe it will change before the submittion.

Right on time when I started to implement the pause and settings panel where you can adjust the music and sound volume, the gameplay music arrived from my colleague Brian. You can hear the music in the uploaded version to itch.io. The style for the panels and the buttons was done very simplistic. I used two images to achieve a nice outline for my buttons and the menus. 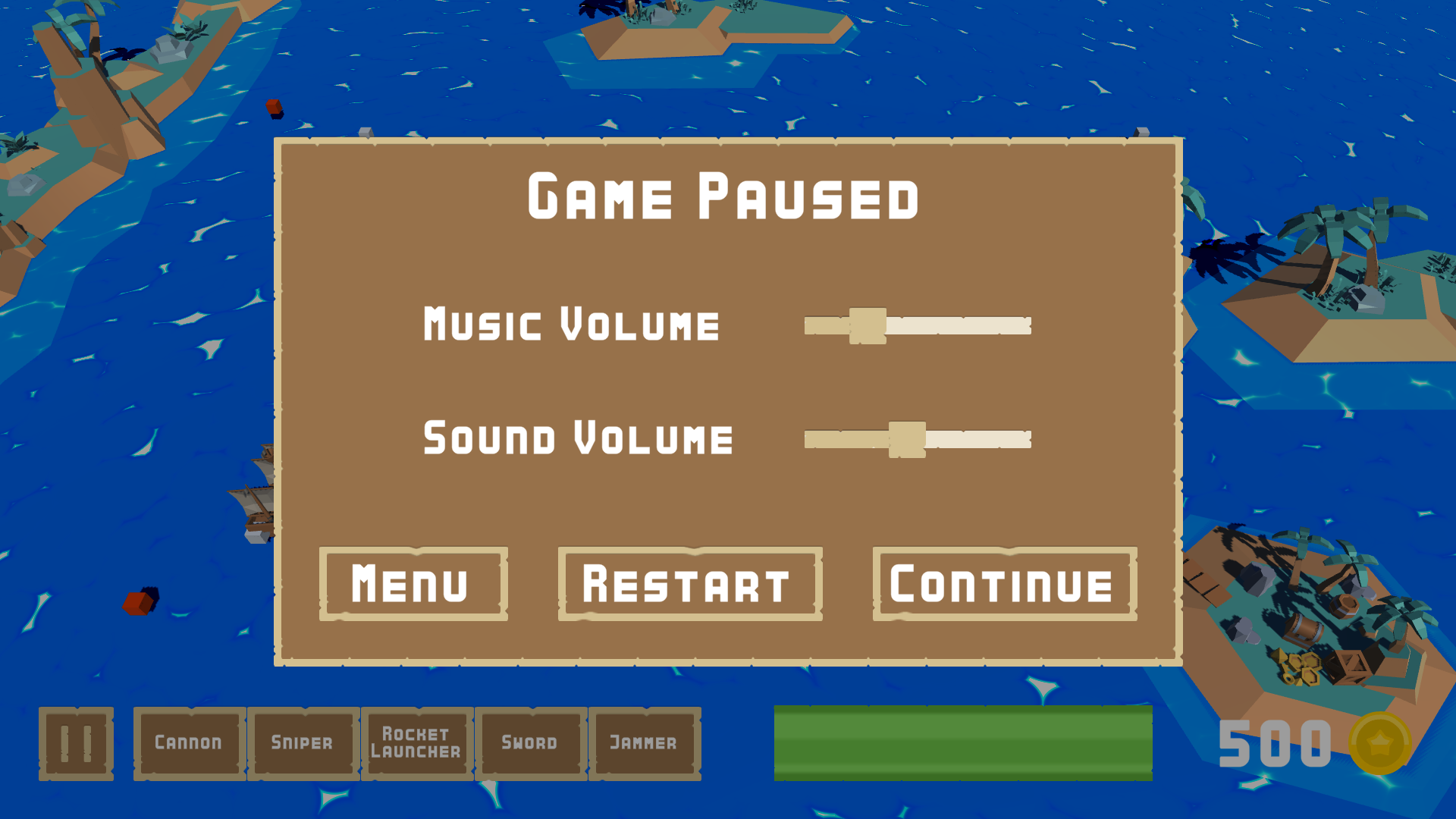 To prepare for different levels, the game over and level complete panels were created next. 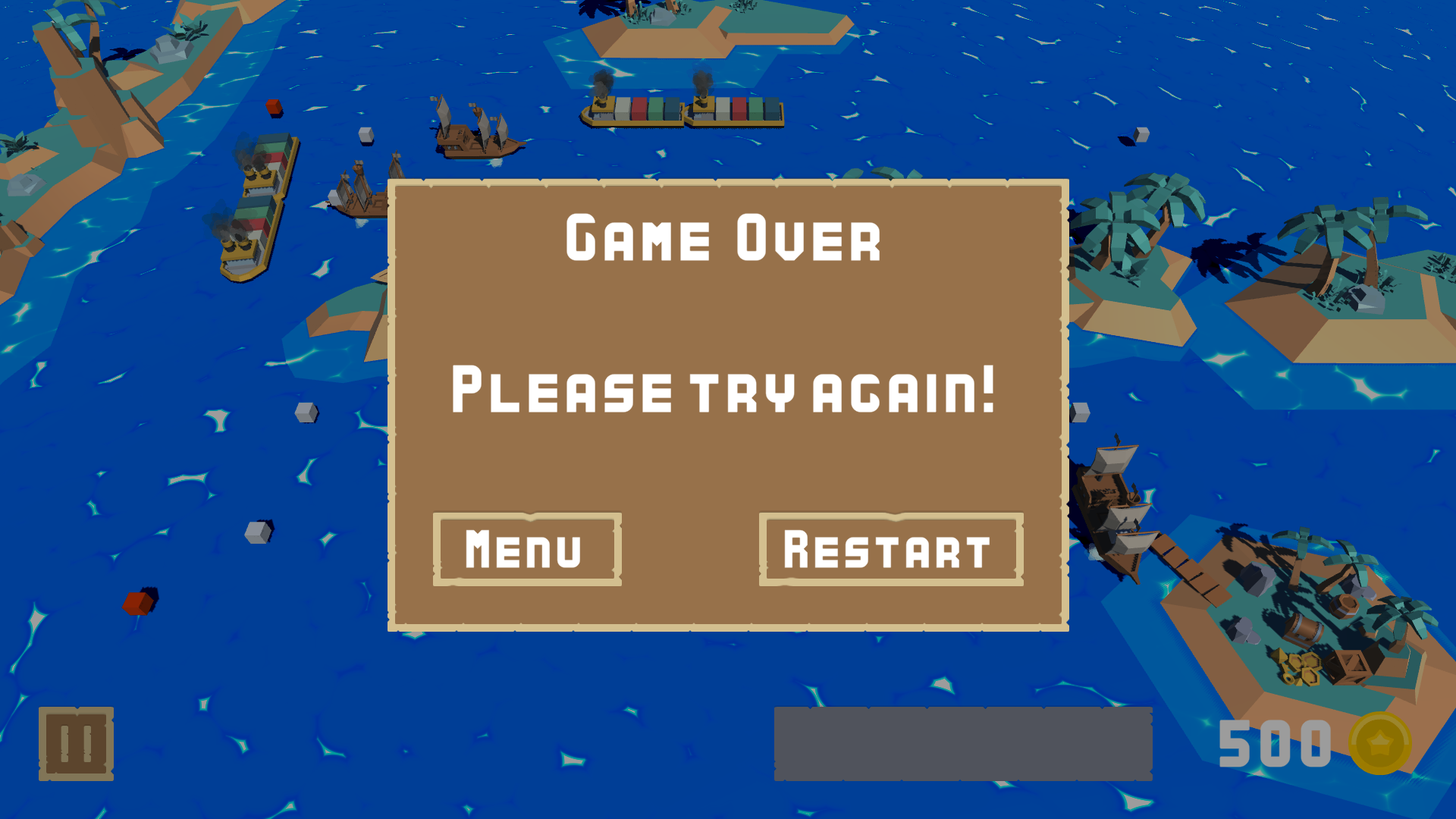 Now came a fun part. Adding particles to the ships and weapons. You have already seen the particles for the ships because I made some of the GIFs when they where already implemented, but you will see the weapons soon.

At first I tried using the particles pack from Kenney, but I did not like the particles in there. They all had this blurring outline which didn't fit the style of the game and I was a little disappointed. Additionally, the motivation went down a little to, because I was working like crazy on the game. I then went back to the asset packs and searched for something I could use.

I ended up using clouds from the background pack as smoke, the sun from the same pack as circle thingies for the ship smoke and ship foam and the rocket launcher explosion. I then took the star from some 2D alien pack as hit indication for the sniper and sword. And the sword got an edge particle system which emits trails to make for an even more epic look :D

Due to the size I had to upload it to imgur. So here is the link:

Now everything was in place to create some more levels which was the last task for that day. So I sat down and thought about some interesting level layouts and implemented them. I ended up with 4 levels, which should be enough for a game jam game, because the tweaking and balancing is still open to make for a fair and challenging gaming experience.

Here are the open points for the last 6h before the submition:

Now let's get back to work :D

Tower defense game with a twist.